Celebrating the Career of Heather Marrazzo 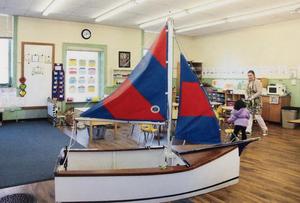 After almost 30 years of teaching at Westfield Friends School, our beloved Heather Marrazzo has decided this will be her last class of PreKindergarten teaching.

After almost 30 years of teaching at Westfield Friends School, our beloved Heather Marrazzo has decided this will be her last class of PreKindergarten teaching. Heather has been such a treasure to her students, their parents, and to her colleagues throughout her tenure. Her unconditional and complete joy and love for teaching the youngest of our student body has enriched and shaped the lives of so many throughout the years, including those she’s reached through the service projects she created and maintained. We will miss her ever-smiling face and exuberance in our hallways and classrooms.


We welcome you to share your tributes and memories in congratulating Heather for all her years of service at Westfield. You can do so HERE, or email ltaylor@westfieldfriends.org. All will be shared with Heather.


When Heather graduated from Glassboro State (now Rowan) with an elementary teaching degree,  she heard about an opening for a third grade assistant from Westfield teacher Cass Michel, who was a neighbor of her future in-laws. Cass thought she would get along wonderfully with Valerie Parry who was the third-grade teacher at the time. Cass was right, and after interviewing with Valerie and then Head of School, Bill Probsting, in the summer of 1992 she was hired.


After a year as Valerie’s assistant, Heather became the Reading Teacher working out of what is now Laura Jaslow’s Office, providing extra help and enrichment.


On February 25th, 1995, Heather and Mark were married, and then Westfield Students, some of whom are now current Westfield parents, were in attendance.For the next few years, she taught first grade across the hall from Valerie. Her children, Mark and Jake, were born in those years. The love from the WFS staff supported Heather and her family in so many ways, as she was a young teacher and new mother.


When Mark turned 4, he entered Pre-K with Mrs. Weider. When Mrs. Weider retired in 2002, as Mark was about to enter Heather’s first-grade classroom, Mrs. Marrazzo asked Mr. Probsting if she could take over as the next Pre-K teacher and he agreed.  She moved to the former Pre-K building which is now the PreSchool 2 and 3-year-old building, the original Meeting House. Heather  loved that space and she describes being there with the 4 and 5-year-olds as her “happy spot.” Jake was entering WFS that September and was in her first Pre-K class.


She spent many happy years in that building with Maureen Matulewicz, the hardest working assistant a teacher could have. To make room for the new First Friends 2 and 3-year-old program, the Pre-K classroom moved down to the main building around the corner from where she started.


Heather has had a career dedicated to service and it has been one of her favorite aspects of teaching at Westfield. She initiated many of the projects that are still going on today. She and Maureen would deliver fresh fruits and vegetables to a local family in need.  Each week a family would sign up to bring in produce after shopping with their child to talk about others in need. She began a program where first-grade students would go to Archway Senior Center and play games, bingo, and read books, with residents.  The school would provide a bus to take to spend the morning with them about once every few months. She collected soda can tabs for Ronald McDonald House, which she and her children delivered in the summer after the year-long collection.  There were usually 7-10 tubs. The tabs were then recycled to raise money for the charity.


Heather also began the Holiday Adopt-a-Family through Volunteers of America in Collingswood.  Each class adopts a family in need and helps to purchase items on their wish lists. Also, her students would make Apartment Starter Kits for homeless families who are getting their first apartment. Pre-K and Kindergarten families contribute items to fill a tub that a family would need as they enter the apartment from a Homeless Shelter - items such as tin foil, soap, and shower curtains.


Clay Hearts for Samaritan Hospice is another program where Westfield students learn to practice compassion. The hearts are made by the entire school and given to family members of those that have passed as a reminder that they are loved.


Pre-K and Kindergarten students also participated in Undies for Africa where students collected undergarments and stickers from the entire school for children in  Uganda whose parents have died or have HIV.  There is a sister hospice in Uganda through Samaritan. They even had Ugandan nurses come and talk to the students about what they do and how they take the children's undies back with them. Heather’s close friend Sherri has been a social worker with Samaritan and visited Uganda. She has been a liaison between Westfield and Samaritan over the years.


Students also participate in Blessing Bags for the homeless through The Unforgotten Haven.  They collect toiletries, snacks, socks, etc, and make cards to put in gallon ziplock baggies to be given to homeless people. The entire school collects the items and works together to fill the bags to be given out.


Heather and Liz DiPasquale served as Preschool directors for 3 years. They developed Westfield's First Friends preschool program. They set up the classroom, developed curriculum and schedules, met with families and children, and helped to hire the teachers and assistants for this program, which has proven to be a tremendous success and welcome expansion of the Westfield program.


Heather and Liz also held the first-ever Preschool Summer Camp. Having Preschool students in summer camp with their future teachers helped them get to know each other and reduced any nervousness or fear they had as they moved down to the main building. The parents also felt more comfortable getting to know the teachers before school started.


Heather started the Pre-K Art Show to showcase the talents of her students. They studied different artists and their works and different styles of creating. She saved their work throughout the year until May when the Art Show was held. Pre-K students would tour every class in the entire school throughout the day.  It was a wonderful opportunity to see how supportive the other classes were of the youngest students in the school.


Heather helped to expand the Buddy Program to include the Pre-K students.  They started having sixth-buddies.  It had previously only paired Kindergarten and First Grade students with 7th and 8th graders.  Children now start with their buddies in 6th grade and stick with them until they graduate.


Frogs and ladybugs have been a tradition in Pre-K Curriculum. They have a tadpole and watch it turn into a frog. This year the kids named him Fred. They also look at the life cycle of ladybugs and release them into the WFS garden when they reach their final stage of maturity.


Heather believes that young children learn best by doing.  She has strived through the years to keep her students moving and learning at the same time. It is very important for them to want to come to school each day and be excited about learning whatever is taught each day. They become “Team Pre-K” and learn how to be a good friend by helping, listening, and being a part of the team each year.


As Mrs. Marrazzo moves on to the next phase of her life, she reflects, “As I leave this school, my heart is both full and broken at the same time. The memories and love I have felt over the years from the WFS staff and families is something I don't think I will ever experience again but it will stay with me. Westfield was my second family in those early years; we looked out for each other. I have friends that I will continue to have for the rest of my life. Not many people can say they have worked in the same place for close to 30 years. But life is like an ocean, it has calm days and it has high, rough waves.  We will see what happens in my life next, but I know Westfield provided me with some really wonderful memories.”


Again, you can share your tributes and memories in congratulating Heather for all her years of dedication and service at Westfield HERE, or email ltaylor@westfieldfriends.org. All will be shared with Heather.